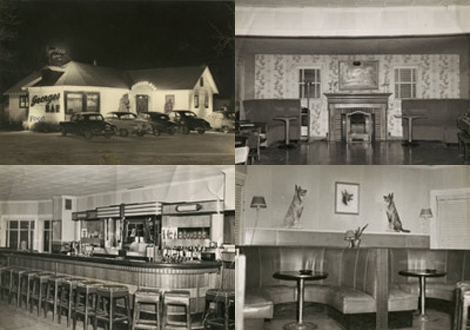 Since George Fiedler opened the doors in the late 1930's, George's has been a favorite gathering place for local residents and travelers alike.

In the early days, patrons would stop in to meet friends or to be entertained by Pal, George's German Shepherd - whom legend tells, could use the jukebox and cash register. Beginning around 1950, guests became the entertainment with the arrival of the nine foot Steinway concert grand piano. Well over 125 years old, this same piano continues to be the source of the sing along which fills the barroom on weekends.

In 1960 George sold the establishment to Dod and Eloise Guyon. To accommodate their growing clientele, they began an extensive remodeling project in 1964. The kitchen was relocated creating the private room known as the Barrel Room, and in addition, the dining areas were enlarged and the interior was completely redecorated. Upon retiring, the Guyon's sold the business to Lou Neuville in 1973.

In 1976, the business was sold once again. This time to the current owners, Chuck & Edie Quimby. Edie had first come to work for the Guyons as a waitress in 1967. Under Lou Neuville she moved into bookkeeping and management. Chuck had worked in home construction, and brought his handyman skills to the business - in addition to learning meat cutting and bartending.

Chuck and Edie's son Brad was a freshman in high school when they purchased George's. Brad spent his high school years and college summers washing dishes, bookkeeping and learning the ropes in the kitchen. After graduating from St. Norbert College in 1985, Brad joined his parents in operation of the steakhouse.

Today, we strive to uphold the tradition of quality food and beverage begun by George Fiedler. We hope the friendly atmosphere returns you to a bygone era as you relax and slip away from the hectic pace of today's busy schedules. Along with our dedicated staff, we'll ensure your visit is a pleasant one.